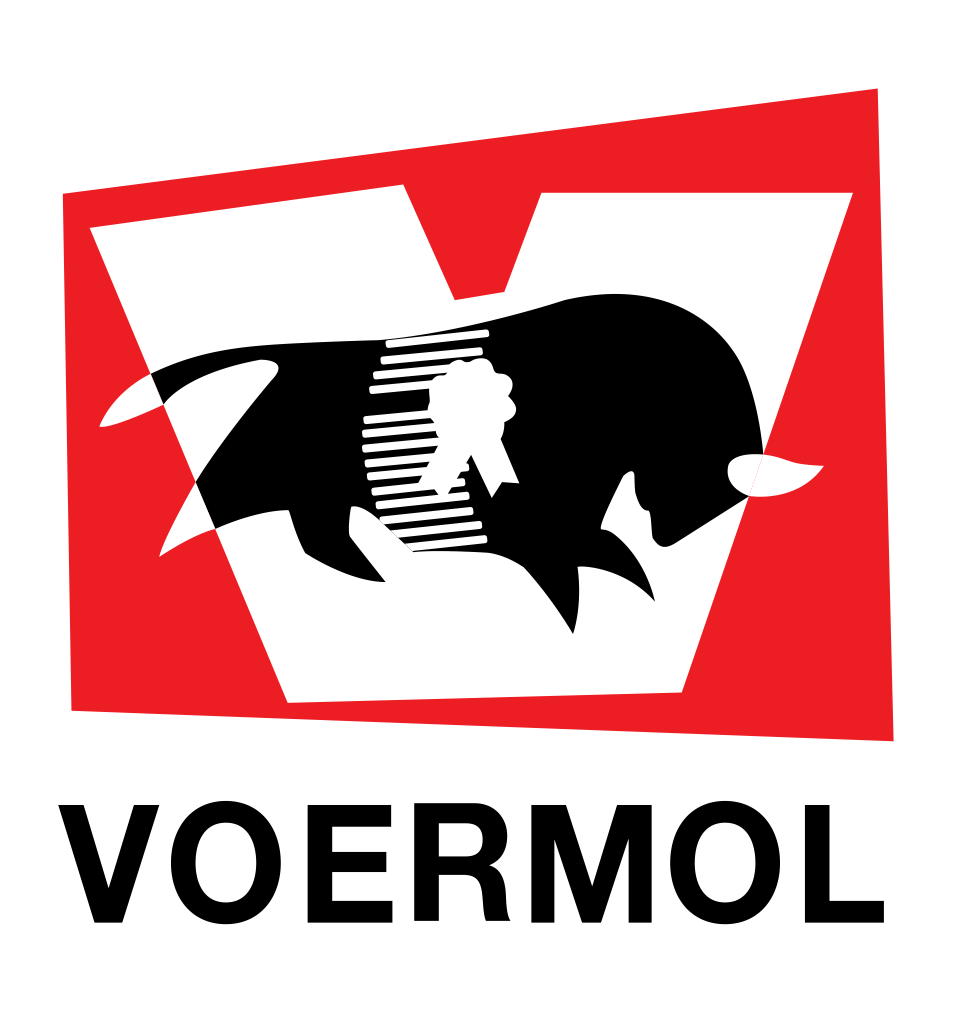 Justin de Haas, Procurement Manager of TWK Agri Proprietary Limited, congratulated Voermol on being a supplier that has met or exceeded a very stringent set of performance criteria.

He thanked Voermol Feeds for showing support and commitment to adding value to the TWK product range/services. He said that maintaining a focus on the details to achieve perfection each day is not an easy task, so much so that only a fraction of TWK’s suppliers earned this superior recognition.

Once again Voermol has been rated the leading livestock feed supplier in South Africa.

Voermol received the following awards in the PMR.africa annual national survey of Livestock Feed Suppliers in SA, conducted from June and July 2020:

At Tongaat Hulett, we are taking all the steps necessary to ensure that we support the call this week by President Cyril Ramaphosa and the South African government to institute the measures required tob control the rapid spread of the Coronavirus (COVID-19).

I wanted to give you some insight into how Tongaat is approaching the lockdown. The President indicated that essential services such as food production would continue to operate, and Tongaat falls into this category.

As such, we will still be operating to supply our consumers and consumers with our products. We will continue to work closely with our suppliers to secure essential supplies. Some members of our team will be working from home but every effort is being made to continue to meet the expectations of our clients and delivering on our mandate to contribute towards feeding the country at this time.

The safety and wellbeing of our employees are front and centre in all our considerations. The manner in which we continue our operations will ensure the safety of our employees, their families and the community. We have shared guidelines to all our people on how to keep healthy and critically, to minimise their interactions with others.

These are challenging times, and we as Tongaat are determined to play our part in not only ensuring our people, our communities and broader society have the foodstuffs they need during this period, but also that they are kept safe.

The agriculture and food supply sector is one of the essential systems for livelihood. As with many of our clients, our products are essential to the provision of food to millions of people across the country each day. This means that Voermol Feeds falls within the category of businesses that are exempt from the lockdown announced by the South African Government.

We have been carefully monitoring the situation and have already taken numerous steps to safeguard the supply of our services to you, the wellbeing of our employees and beyond.

We ask that any visitors adhere to the strict health and safety measures in place on each site. These measures allow us to continue to provide services and support to our customers. Now, more than ever before, our continued service to you and our country is of the utmost importance, so we will do everything in our power to ensure this.

Should you wish to discuss the matter in further detail or have any questions, please contact your Voermol representative directly on their mobile or via email.

The 2019 National Cattle & Sheep Farmers of the Year awards were held on 13 November 2019 at the Windmill Casino in Bloemfontein.

Cobus and Magdel van Coller from Viljoenskroon received the 2019 National Sheep Farmer of the Year award and Tian and Stephanie Kruger from Roedtan received the 2019 National Cattle Farmer of the Year award.  The sheep finalist awards went to Frans and Andries Marx from Burgersdorp, and Korenhof Merino’s (Dirk Hanekom) from Bredasdorp.  The cattle finalist awards went to Jason Carroll, Boschendal Black Angus from Franschhoek, and B W Staal (Pty) Limited (Burnie & Kosike Staal) from Kroonstad.

Photograph of the winners: (left to right) 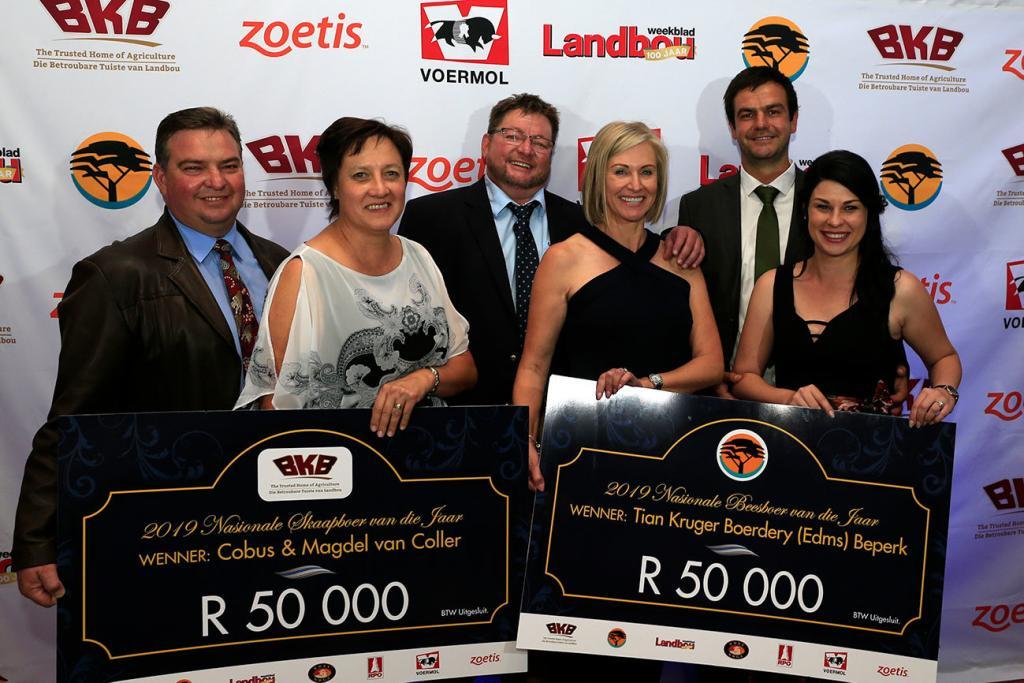 Voermol's sponsorship of the RPO

In terms of Voermol’s sponsorship arrangement with the Red Meat Producers Organisation (RPO), the RPO receives an amount based on the sales of Voermol SB 100 (V4498) and Voermol SS 200 (V8592). Kenny Crampton, Voermol’s national sales manager, handed over a sponsorship cheque in the amount of R134 899.80 to the organization at the National RPO Congress. 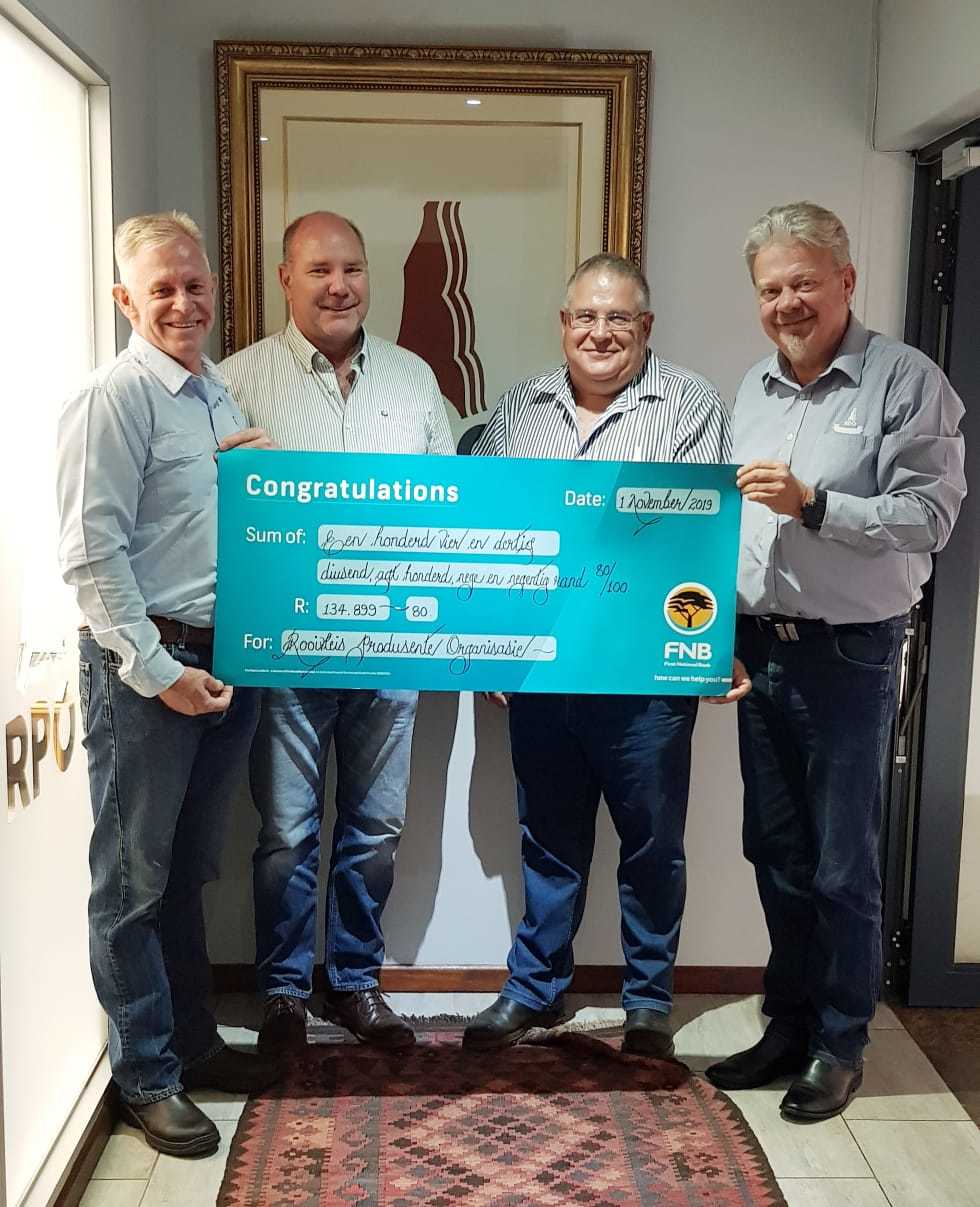 Voermol won one of the Top Supplier Awards for 2018/19 at the OVK Co-op awards function.

In the photo, left to right: 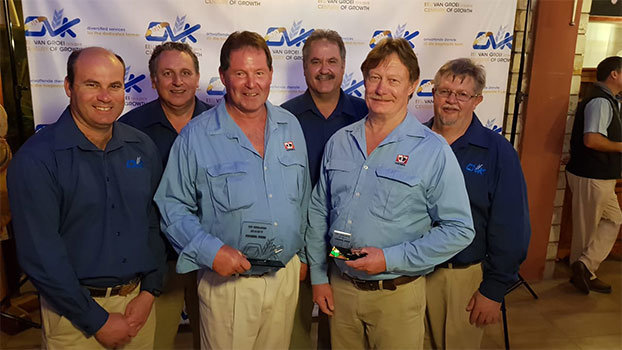 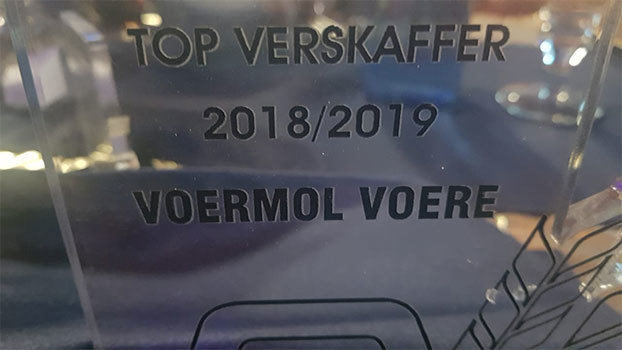 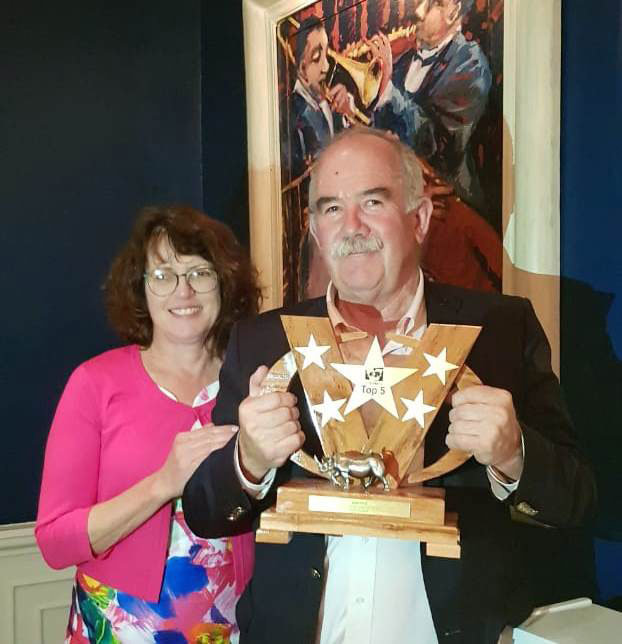 Wolf Edmayr, MD of BKB, with his wife, Birgit Edmayr. 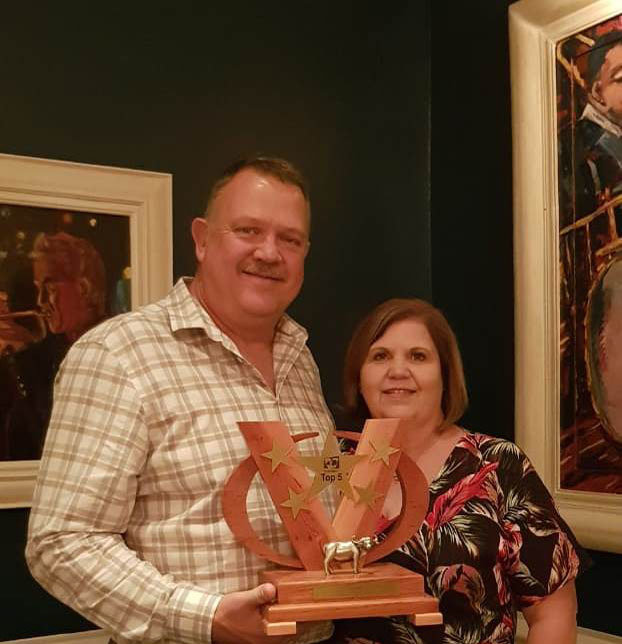 Daan Bronkhorst, MD of Hinterland, with his wife Alet Bronkhorst. 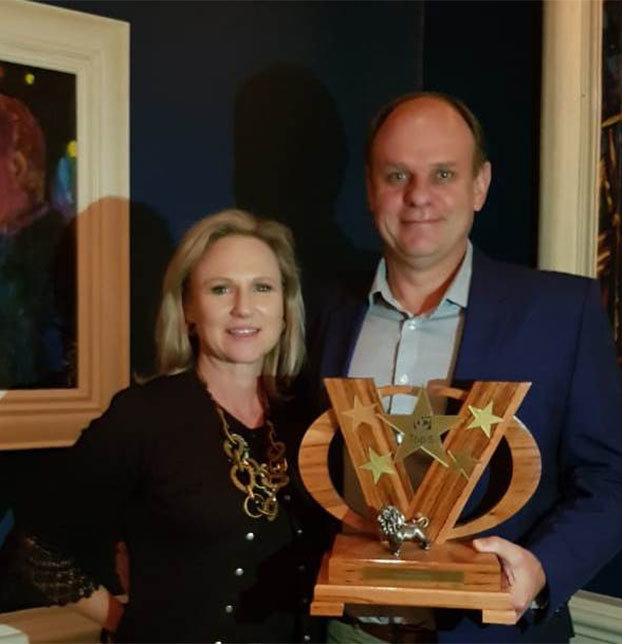 Andre Myburgh, MD of TWK, with his wife Cecile Myburgh 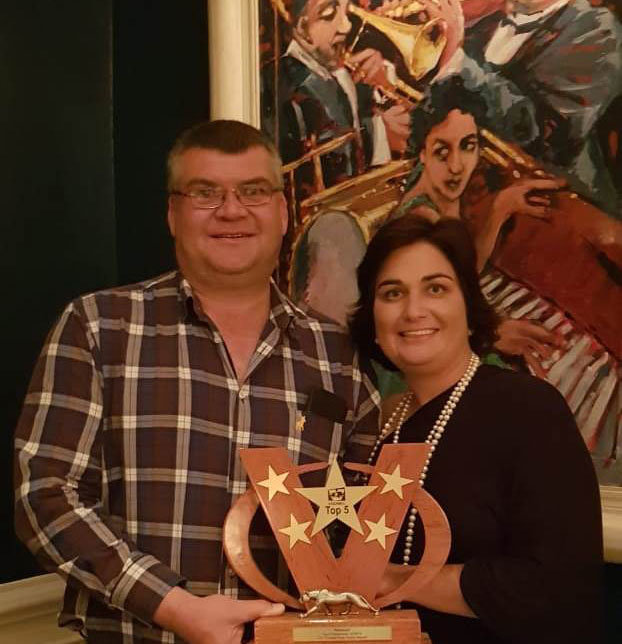 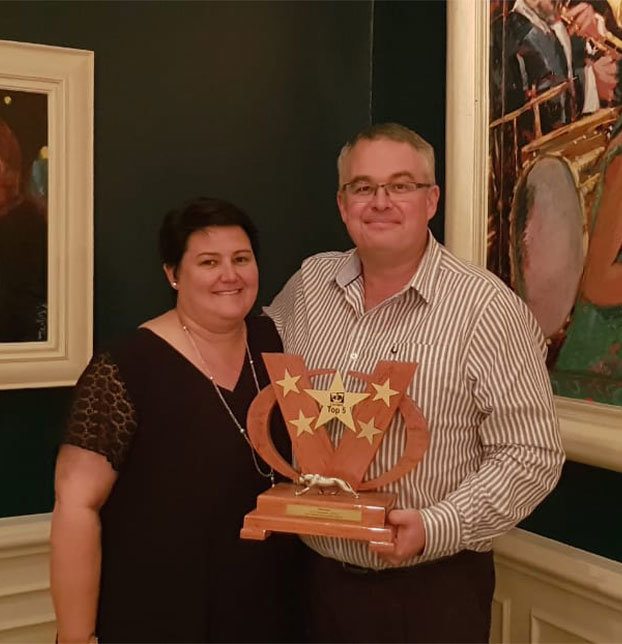 On Thursday, 4 April 2019, we were saddened by the news that Joan Boyes, who we had met just a few months prior, had passed away at the age of 92. In December 2018 Joan and her son Duncan, joined us for tea at the Voermol Executive Office in Maidstone, Kwa Zulu-Natal. Both Joan and her late husband, Peter Boyes, played a pivotal role in the establishment of Voermol Feeds. Joan, the author of two novels since the age of 90, very quickly won our admiration for her energy, astuteness and ‘joie de vivre’. During the visit, Joan and Duncan reminisced about the years when Peter had worked as an engineer for the Tongaat Sugar Company.

‘The Birth of a Bull Calf’
Up until 1958 the removal of molasses was a problem for the Company. The vision was that animal feeds could be manufactured from molasses and bagasse, both by-products of the Tongaat Sugar Mill. In 1958, Peter Boyes, an engineer, and Dr. Geoff Cleasby, an agronomist, were given the task of finding a satisfactory solution to the disposal problem. However, molasses was a difficult-to-handle product and the challenge was how to convert it into an animal feed which could be conveniently fed.

Joan told us that Peter and Geoff began experimenting and she was asked to fetch a sausage machine from a butcher in Tongaat. It is now part of Voermol’s history that in 1958 the first product, based on a combination of molasses and bagasse, was produced using that sausage machine. The mixture was given to a few farmer friends to feed their stock, who ate it readily!

By 1962 the process was sufficiently advanced to allow for the construction of a pilot plant behind the sugar mill bagasse shed. The management of the Tongaat Sugar Company decided to found a new company to produce and market the animal feeds being developed. The incorporation took place at a Board Meeting held on 4 August 1962. Present were Messrs C J Saunders (chairman), A D Hankinson, G A Ellis, J P H Bentley and R B Thompson (secretary), with Peter Boyes and Geoff Cleasby as managers. A new company was formed called “The Moreland Molasses Company”. At the time Mr. Douglas Saunders, chairman of the Tongaat Sugar Company, who had shown a keen personal interest in the fledgling feed company, announced that “Tongaat’s bull calf had been born”. The new company’s name was later changed to “Voermol Products Ltd.”, then to “Tongaat Milling (Pty) Ltd.” and finally to “Voermol Feeds/Voere”.

By the end of January 1962, the first bags of Voermol Meal came off the production line. Peter Boyes, was the first manager of the company, a position he held until September 1979 when he retired as managing director. On 27 April 1990 a contract was signed for the design, manufacture and supply of a new production facility for Voermol Feeds. At the end of January 1991, Voermol Meal, a forerunner of all the present molasses-based feeds, was produced in the new factory.

Voermol Feeds became the first company in Africa and possibly the world, to successfully commercialise a combination of molasses and bagasse. Molasses is not only a good source of energy, with vitamin B and trace minerals, but it is also very palatable and a good binder; thereby reducing dustiness of the feed. With the result, livestock are more likely to get a balanced intake, as they are less likely to feed selectively. Today, Voermol offers a wide range of products that are scientifically formulated to meet the nutritional requirements of ruminants, during various production stages and on all types of grazing.

After the visit to Voermol Feeds, Duncan sent a message thanking us for the hospitality shown ‘to an old lady’ and for ‘making her year complete’ – Joan’s words. Both Joan and Peter Boyes will be remembered for their meaningful contribution to the establishment of Voermol Feeds. We express our heartfelt condolences to the family. 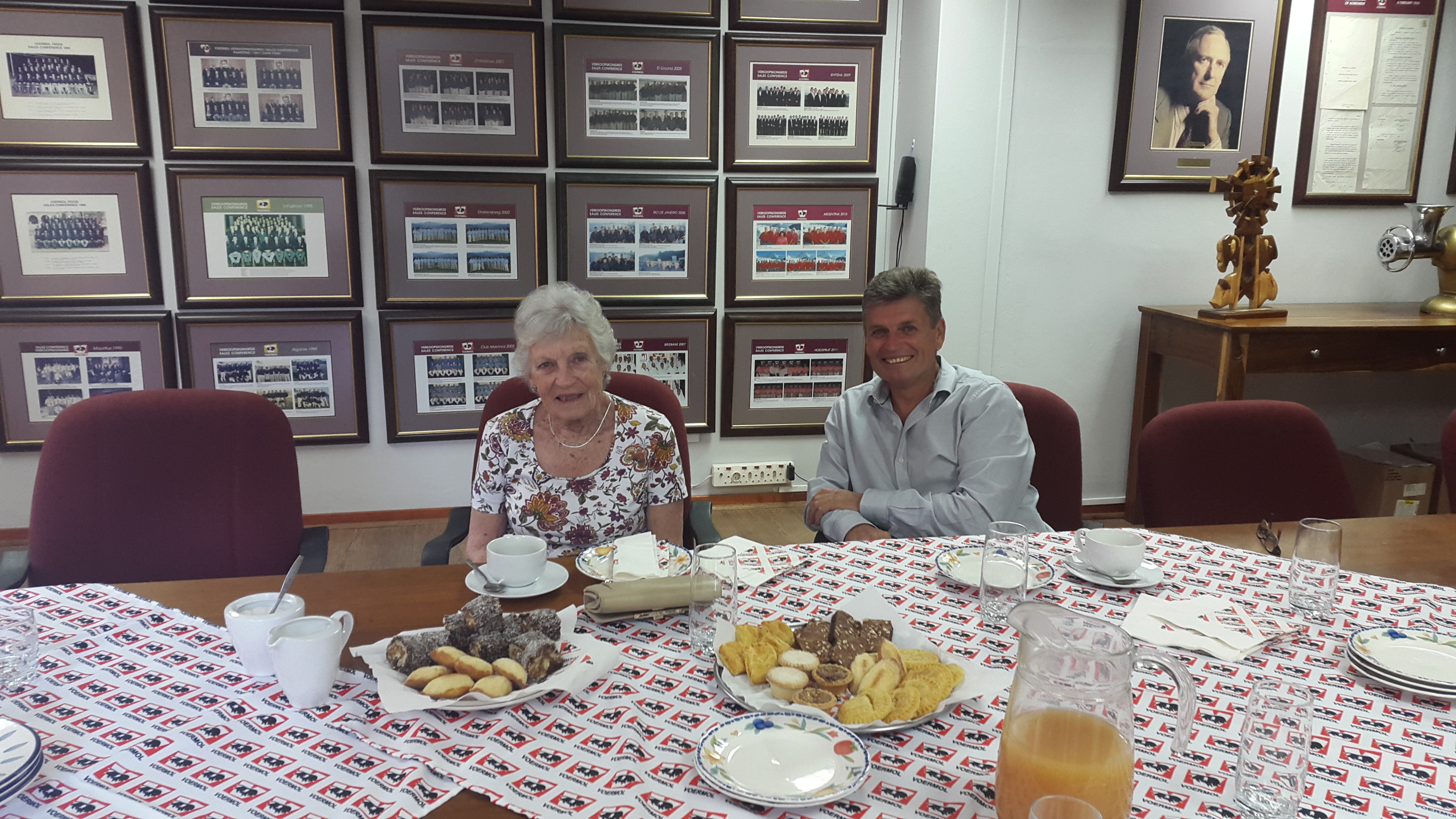 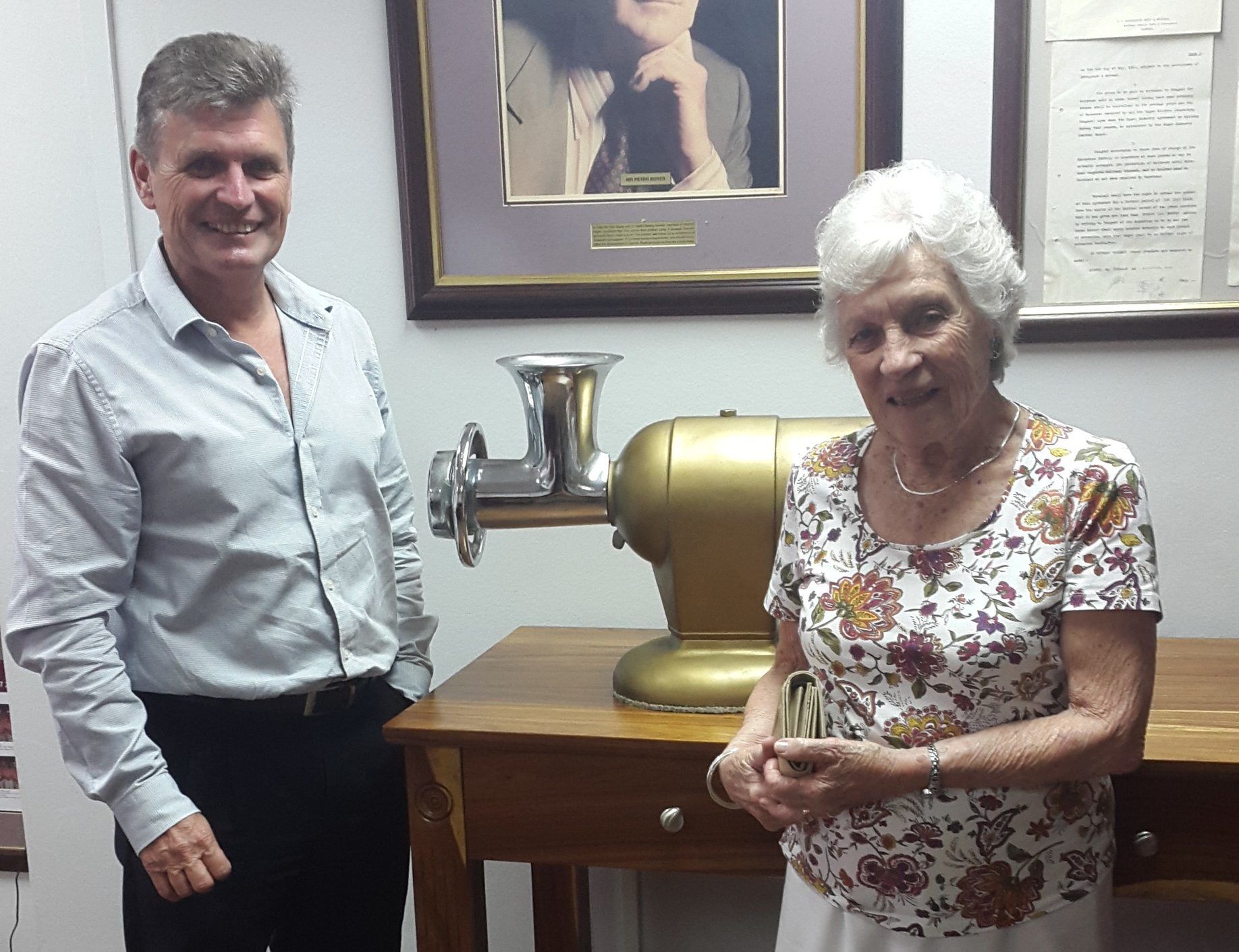 Mrs Joan Boyes (late) and her son, Duncan Boyes (left), in front of a picture of Joan’s late husband,
Mr Peter Boyes and the sausage machine.

The Voermol-Overberg Agri Supplier of the Year 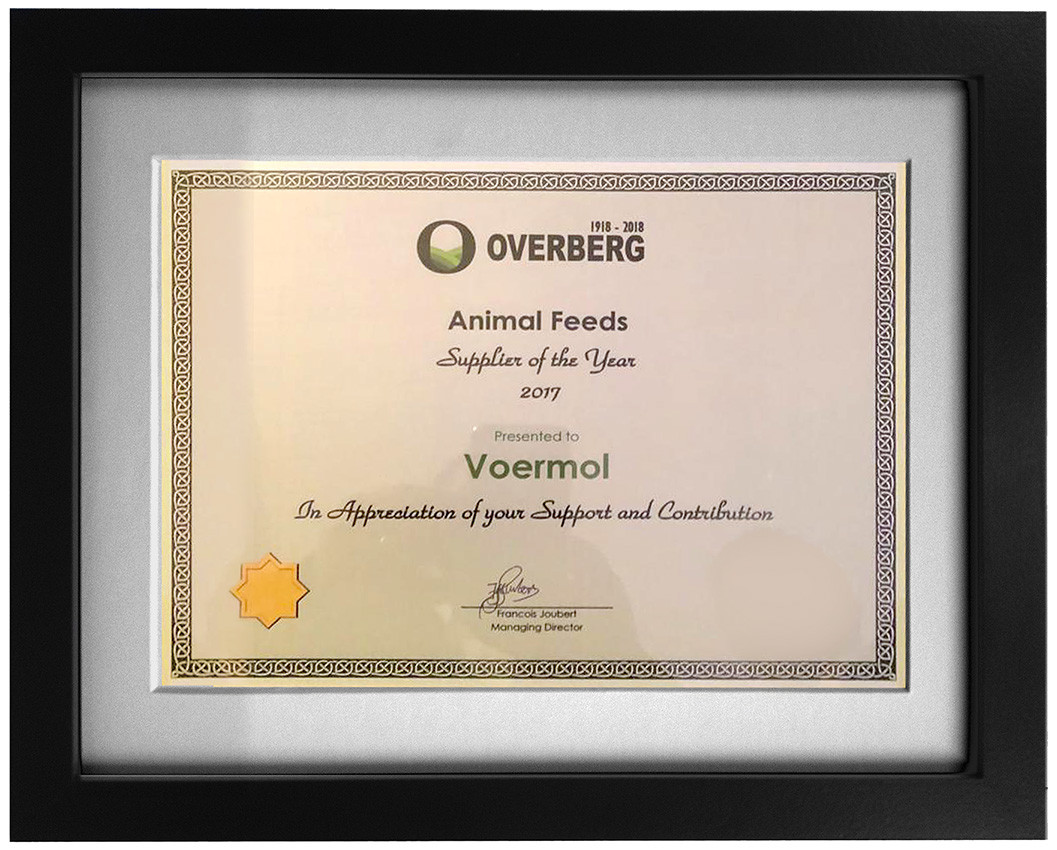